One way to induce havoc in Bruise Cruise is to sail right up to a competitor's ship and initiate a massive rumble between your passengers. It’s a relatively rare event in the game, and the rumble itself is just a diversion to raid the competitor’s stock of weapons.

Massive quantities of alcohol, confined spaces, and severe sunburns combine to form a powder keg ready to explode at the slightest misconception of what someone means when they say, “Hey man, I don't think you're supposed to be naked when you play shuffleboard.” Suddenly, phones whip out to record a chaotic free-for-all of whirling bodies and “Come-at-me-bro!”s.

If you search for incidents of pugilistic (more likely rolling-on-the-floor-istic) malfeasance on the high seas, one video will continue to pop up. Check out some of these neural blank slates:

My favorite part is 45 seconds in, when this security officer turns around and sees someone filming the action: 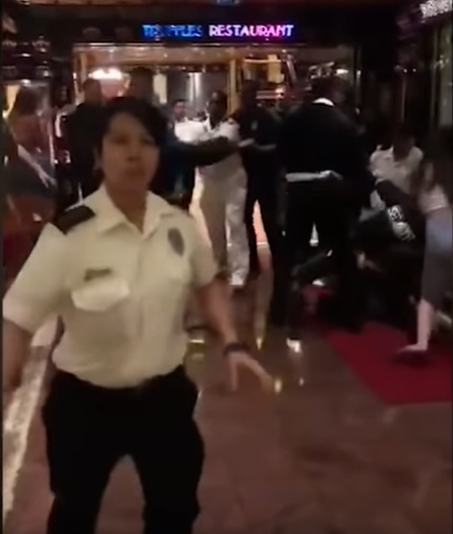 Her training kicks in at this point. After a brief triage, she decides that he's the biggest threat to safety and immediately runs to slap the camera out of his hand: 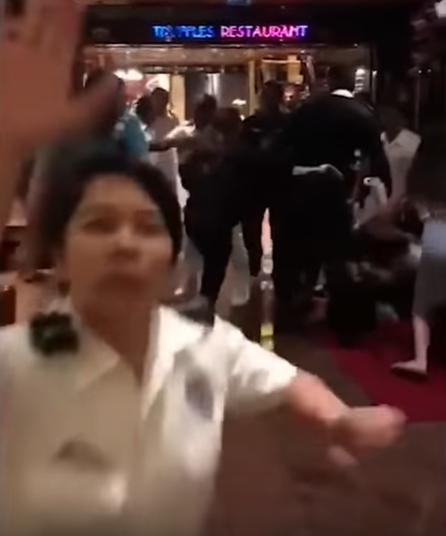 In her defense, she may have been slapping the amateur videographer just because he was filming in portrait mode, in which case she should be promoted and given a commendation.

Or perhaps she was just going in for a high five to celebrate the madness, which is also a commendable move.

Apparently this brawl and several others on the same cruise were caused by a single extended family:

(Ease up on the URL length there, news.com.au. This is how brawls get started.)

These avatars of dysfunction are supposed to be on a relaxing family vacation in a tropical paradise, but they just can't seem to leave their work behind. I am assuming they are a family of bouncers or the world's worst mixed martial arts fighters.

*Surprise footnote in the middle of the blog post! The official sport of Bruise Cruise (and every other cruise) is, of course, shuffleboard.

And then there is this case.

The article contains an astonishing four-paragraph stretch of journalism. All future Pulitzer Prizes should be awarded to the author:

“One witness, part of a group involved in the trouble, explained to staff that things kicked off when another passenger appeared dressed as a clown,” Gaisford said.

“This upset one of their party because they'd specifically booked a cruise with no fancy dress. It led to a violent confrontation.”

In the United Kingdom, fancy dress means wearing a costume.

“There was blood everywhere,” Gaisford wrote. “Passengers used furniture and plates as weapons. Witnesses told me they were so frightened they had to hide as family groups fought,” Gaisford added.

Passengers. Used. Furniture. And. Plates. As. Weapons! This might be the most Bruise Cruise thing I have ever read. This is the ethos I was attempting to evoke when I created Bruise Cruise. Art imitates life, and that life is absurd. And dumb.

Following ancient tradition, I will end this post in the same way that every article reporting a cruise ship brawl must end:

Authorities believe alcohol may have been a contributing factor.